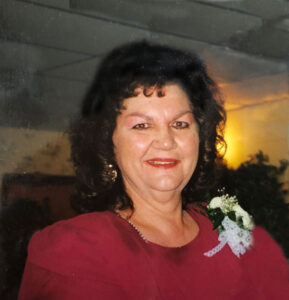 Romona Mae Summers (Mona)(former married name Smith, Maiden name Klein), age 76, passed away on May 7, 2020 in her son Stacy’s home in Mauston, WI. Mona died after a courageous battle with cancer. Mona was born on October 20, 1943, in Cassville, Wisconsin. She was the daughter of Leonard and Esther (Clauer) Klein. She grew up in Cassville and raised her children in Lancaster, then moved and spent her last 24 years in Lone Rock.

Mona graduated high school from Cassville High School. She was married to Robert Smith who passed away of cancer in 1974. Mona was together and married to the love of her life Fred Summers since 1996 until he died in 2013. She loved going to hear Fred sing and play guitar or help him work on his carpentry jobs.

Mona was an extremely hard working woman. She catered for years out of her home, then started two restaurants in Wisconsin, one in Beetown and the other in Lancaster. Both were called Mona’s Pub & Pantry. She was world-renowned for her award-winning potato salad. Mona loved her family and friends. She loved music and fishing. She was never short of words and loved long conversations with friends. She was very proud of her children and grandchildren. Stacy Smith, her eldest son recalls her being exceptionally proud the day he was sworn in as Circuit Court Judge in Juneau County and she helped him put on his judicial robe for the first time.

Mona was loved by many and she had a huge heart for people. She took people in her home if they needed a place to stay much like an old lady that takes in stray cats. She gave love unconditionally. She didn’t have a lot of money, but she was willing to share her home and food with anyone who needed it. Her children learned what “love thy neighbor” truly meant. Mona was never materially rich, but she was a very rich woman, as she was loved by so many.

Mona had a passion for life. She had a fiery temper but a giving heart. She always had an upbeat personality thinking that the world would get better with time and prayer. She loved her Lord and Savior Jesus Christ. She wasn’t much of a churchgoer but did read her Bible on a regular basis.
She had a passion for life until the very end as she was fighting hard against the cancers that ravaged her body. Until the bitter end, she thought she was going to get better and she was thinking about going fishing this summer and taking her grandkids to a cabin up in Door County.

In addition to her beloved parents, Mona was preceded in death by her first husband Robert Smith and her second husband Fred Summers; two brothers: Robert Klein and Lawrence Klein; her sisters-in-law: Joan Klein, Barbara Klein, and her daughter-in-law Becky Smith.

Currently, there are no funeral services planned due to COVID 19.