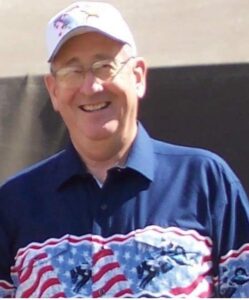 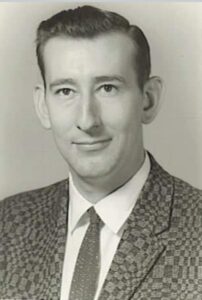 ADRIAN EUGENE (Gene) POURCHOT, 93, of rural Oxford, Wisconsin, passed away quietly and peacefully in his sleep on 7/20/2022, after a long illness.

Gene was a devoted husband to wife, Norma Iona (Anderson) for 67 years, who passed away nearly 6 years previously… and loving, supportive father to his seven children. He instilled a thirst for knowledge and curiosity in his children.

During Gene’s many educational sojourns across the country, his kids got to see many different states and ways of life; lots of new scenery and experiences, from the Pacific Ocean to the eastern coast of Massachusetts, and even one sight seeing trip into Canada. 🙂

Gene has helped raise 7 children, grown and sold Christmas trees with the help of his kids, started an auction school, and became a very accomplished auctioneer himself. His Saturday night auctions brought friends and neighbors, as well as newcomers for the rare chance to get together and visit, as well as bid on items Gene had for auction. Most of his kids helped out at the auctions at one time or another.

Gene got his bachelors degree, masters degree, and excelled in numerous areas of education, as well as basketball coach. He has been coach, guidance counselor, principal, superintendent of schools, head of Chamber of Commerce, to mention a few.

Gene and family moved around quite a bit over the years, as he gained educational experience and expertise…and each move was an upward step for him and the family’s wellbeing. He was always looking to improve life for his family.

Gene then became Administrator/Teacher for the Wisconsin Auction School that he started up.

Gene continued his higher education and went on to be superintendent, and/or principal at Ridge Farm, Illinois; Princeton, Wisconsin; Putnam, Illinois; Creston, Illinois; Triumph, Illinois; and Dalzell, Illinois, before retiring to just do his beloved auctioneering, when they moved back to Oxford, Wisconsin. He enjoyed being able to listen and talk and visit with neighbors, friends, and newly made acquaintances at auctions and wherever he went.

Besides Gene’s love of auctioneering, he seldom ever missed a Packers football game. Looked forward to those games with great enthusiasm. He and mom used to watch basketball every week on tv, as well.

Gene now joins his loving wife, Norma, in God’s arms, along with his oldest son, Jim, his parents, and his 3 older siblings.

Funeral services will be 12:00 Noon on Monday, July 25, 2022, at Roseberry’s Funeral Home in Friendship. Visitation will be from 11:00 a.m. until the time of service at the funeral home. Interment will be at the Mt. Repose Cemetery in Friendship.