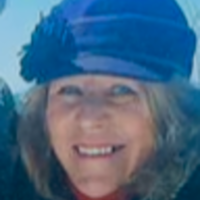 Brenda Lee Young-Lamar, age 59 of Manistique, MI passed away unexpectedly at her residence on February 17, 2021.  She was born on July 29, 1961 in Janesville (Rock County) WI, the daughter of Russ and Elaine (Johnson) Nichols. Brenda grew up in Adams – Friendship, WI and graduated from Adams Friendship High School with the class of 1979.  Brenda lived in numerous areas of the United States, before settling in Manistique with her beloved husband Robby, for the past several years.

Brenda was employed as a driver for UPS until retiring.  She was of Lutheran faith.  Brenda was known to be the life of the party, whether she was with friends, family or even strangers.  Brenda had also worked part-time as a bartender, where she met her beloved husband Robby.  They were married on May 27, 2006.  She would call herself a friend to anyone.  Brenda was a free spirit, and has always surrounded herself with things that brought her happiness.  Her horses were her pride and joy, as well as traveling, the Green Bay Packers, and doing volunteer work in any of the communities in which she lived.  Her family, however, was most important to her.  She had a special place in their hearts, as they did in hers, and together created memories that will be shared and cherished forever.

Visitation will open to the public from 10 AM – 12 Noon on Friday, February 26, 2021 at the Trinity Lutheran Church, 1650 Church Street, in Arkdale, WI.  Due to COVID restrictions, by invitation only a private funeral will be held at 12:15 PM, for family, with Pastor Terry Skildum officiating.  Private lunch for immediate family will follow funeral services at 1:15 PM at Cedar Shack, Adams, WI.  After private dinner, extended friends and family are invited to come to visit at Cedar Shack, Adams WI to celebrate Brenda’s life.

Memorials in Brenda’s name may be directed to the family (Elaine Morgan, 1154 Edgewood Drive – Lot 30, Adams, WI 53910) for future designation.

A message from Brenda:

To Those I love…

When I am gone, just release me, let me go
So I can move into my afterglow
You mustn’t tie me down with your tears
Let’s be happy that we had so many years
I gave you my love, you can only guess
How much you gave me in happiness.
I thank you for the love you each have shown
But now it’s time I traveled on alone
So grieve for me awhile, if grieve you must
Then let your grief be comforted with trust
It’s only for a while that we must part
So bless the memories within our heart
And then, when you must come this way alone
I’ll greet you with a smile and a “Welcome Home.”