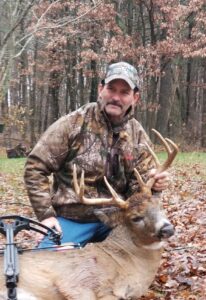 Private Family Funeral services will be Saturday, January 16, 2021 at 1 p.m the Arkdale Trinity Lutheran Church in Arkdale, Wisconsin.   Pastor Terri Skildum will officiate.  Interment will be at the White Creek Cemetery, Town of Easton, Wisconsin.

Brian was born March 11, 1962 in Friendship, Wisconsin to Lloyd Arthur and Arlene M. (Osborn) Morley.   He graduated from Castle Rock Grade School, Adams-Friendship High School in 1980, and UW-Platteville in 1984 with a degree in agriculture technology.  Brian returned to Adams, working for the Co-op, and later began his career with Dellwood Plumbing and Heating.  In 2019, he began working for the Adams-Friendship School District.    Brian married Kathy Roenneburg on Oct 12, 1991 at Arkdale Trinity Lutheran Church.

Brian enjoyed hunting and fishing with his boys and loved traveling with his wife. His dog Oakley was always waiting for him after a long day. Coaching was also a big part of Brian’s life.  He coached hundreds of kids over the years in all levels of youth baseball, football and wrestling.

Brian was preceded in death by his father, Lloyd Morley; grandparents: John and Ina Osborn; and grandparents: Darrell and Mae Morley.

A Celebration of Life will be held at a later date.