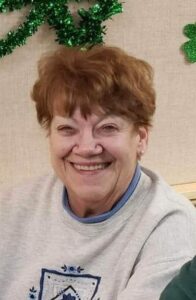 Carol Jean was born June 22, 1947 in Sparta, Wisconsin to Leonard and Arlene (Stoltz) Gnewikow. She was the oldest of four siblings; James Gnewikow, Walter Gnewikow Sr. & Betty-Jo Morehouse. She married her high school sweetheart, Ronald Dennis Johnson on June 21st, 1969 in Tomah, WI. They moved to Adams, WI in 1974, and purchased the Red Owl Grocery Store until 1987. Together they had two children, Rochelle Lynn Anderson-Tesch & Nichole Marie Harrington. Carol then became the Director of Aging in Adams County until she retired. Carol touched many lives through her years of teaching Confirmation and Sunday School at Immanuel Lutheran Church in Adams. Carol was also involved with many extra community activities including, Angel Tree, Salvation Army and Faith in Action.

Carol was a member of the Immanuel Lutheran Church in Adams and always enjoyed helping others in their time of need.

Carol was preceded in death by her parents: Leonard and Arlene (Stoltz) Gnewikow, Brother Walter Gnewikow Sr. and a number of Aunts and Uncles.