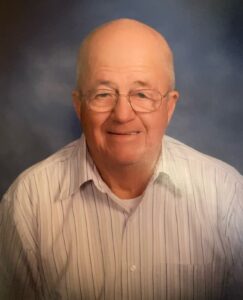 The family of Charles (Charlie) and Helen Anderson are celebrating the passing of a great man from this earthly life into his heavenly home.  Charlie (87) passed away peacefully on November 10th in his Arkdale home, surrounded by family.

During 68 years of marriage, Charlie and Helen were most proud of raising 5 children, all of whom went on to have successful careers and beautiful children.  He is survived by his wife Helen, daughters Debbie, Sheryl, Kathie, Brenda, and his son, Chuck.  He was also the proud grandfather of 13 children and great-grandfather to 21 children.  The teaching, the mischief, and the memories he shared with his grandchildren are uncountable.

Charlie was known for his tremendous work ethic, common sense, and his love of the farm he lived on since childhood. His work included service to our country in the US Army, farming, and forestry.  His professional career spanned 35 years at Great Northern Nekoosa / Georgia-Pacific paper company as Forest Supervisor, where he led harvesting and site preparation operations as well as the planting of tens of millions of red pine trees in Adams and Wood counties.

His passions in life included riding his Gator in his woods, Chevy trucks, Stihl chainsaws, and Polka dancing. His entire family is grateful to have been able to spend time with him during his final days on earth.  So, if you hear the faint sound of polka music coming from one of his pine plantations, it is probably just Charlie dancing once again.  Dad, your work on earth is done.  May you rest in eternal peace!