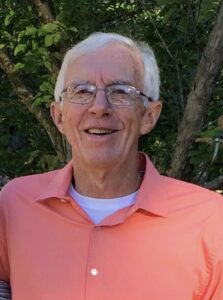 Charles (Chuck) Willard Parr, 81, of Adams, Wisconsin passed away peacefully due to complications of Alzheimers on Monday, December 14, 2020 at Lakeshore Manor in Oshkosh, Wisconsin. His children and wife were with him.

Charles was born December 23, 1938, to Willard and Elaine (Ausland) Parr. He grew up in Friendship, Wisconsin, graduating from Adams-Friendship High School in 1957, where he also met the woman who would become his life-long love, Alice Ann Wagner. The two shared the stage as Homecoming king and queen, a romance that would last more than 60 years and inspire awe in everyone who saw the two of them together.

Charles attended the University of Wisconsin-Stevens Point where he played basketball and later returned to Adams to work for Adams-Columbia Electric Cooperative as a lineman, a profession that became a true passion. On December 30, 1960, he and Alice married, a partnership that would bring the couple five children who were the light of his life. His career eventually took him around the state as an electrical safety instructor for the Wisconsin Electric Cooperatives and then Dairyland Electric Cooperative.

To know Charles was to love him, his smiles, hugs and handshakes overflowing with warmth. His sense of humor (he was known as Chuckles to some), dedication to his family, devotion to his community, and zest for life showed in even the smallest acts. His positive energy and ability to talk to anyone was infectious. No matter where he went, he seemed to always run into someone he knew or who knew him. In his free time, he enjoyed hunting, fishing, boating, keeping a meticulous yard, traveling, helping on the family farm, coaching, refereeing, and watching sports. Though an enthusiastic Packers, Brewers and Badgers fan, he most enjoyed watching his children and grandchildren’s events; his pride in his family emanated from him.

Chuck loved his hometown, and it showed. Community involvement was a passion throughout life, and especially in retirement. Friday nights you could find him checking coats at basketball games or cheering on the football team; Saturday mornings he was working a Pancake or Dairy Breakfast or volunteering at a Brat Fry for the Education Foundation. He would help light up the town for the Holidays with the Tree Lighting at the courthouse and high school, and for years he volunteered at many organizations. On Sundays you would find him helping with mass at St. Joseph’s Catholic Church as a reader or usher. He gave of himself and his time freely, volunteering for meal distribution and taking it upon himself to help those in need. Chuck was a member of many local clubs and organizations; the Jaycees, Knights of Columbus, A-F Education Foundation, A-F school board, A-F Booster Club, Adams County Triathlon Committee.

Memorials for Chuck may be directed to the Charles and Alice Parr Foundation. The foundation will make contributions in his honor to community organizations such as the Education Foundation, A-F Scholarship Fund, St. Joseph Catholic Church, local food banks, Adams County Humane Society and Parks Department among others. The foundation will also contribute to Alzheimer’s research and fundraising efforts. Donations can be made to the Foundation account at One Community Bank in Adams, via Venmo at parr.foundation@gmail.com, or mail to 2731 Clairville Road, Oshkosh 54904.

The family expresses their sincere gratitude to Lakeshore Manor and St. Croix Hospice in Oshkosh for the loving care of husband, dad, grandpa, and Bumpa.