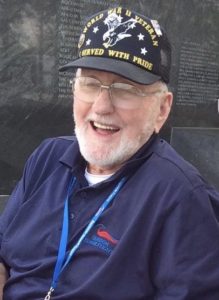 Curtis was born on August 2, 1928 in Oak Lawn, Illinois to Otho and Margaret (Hendricks) Lee. Curtis left home in 1943 at the age of 15 and joined the Merchant Marines with his time spent in the North Atlantic. At some point thereafter Curtis changed his birth information on his birth certificate to show he was the age 17 in order to join the Navy, where he finished his military service in 1947. During his service as a Navy Seabee he was stationed in Guam in the Mariana Islands in the South Pacific. After his service in World War ll, Curtis went on to meet Eileen whom he married on April 30, 1949. Curtis and Eileen were happily married for 62 years until the time of Eileen’s death in 2011.

Curtis was a devoted husband, father, grandfather and great-grandfather who took pride in spending time with his family, friends and loved ones.

Curtis’ trade was a skilled contractor. From the quonset huts and runways he built in the South Pacific to going on to owning his own construction business that he started in Oak Lawn, Illinois. Curtis eventually retired from construction and went on to keep his hands busy in his workshop at his home in Adams, Wisconsin that he also built himself.