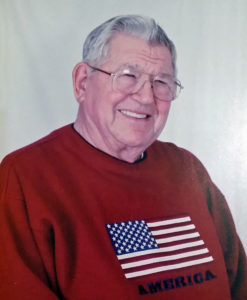 Dale Ernest Jakel came into this world on October 30, 1930 in Curtiss, Wisconsin. Dale passed away on Good Friday, April 10, 2020 at his home in Adams, Wisconsin. He was the 7th child born to Anna Theresa (Wasmuth) and Charles Jakel. In all, he had 5 brothers and 3 sisters.

In 1949, Dale graduated from Abbotsford High School. During his high school years, his summers were spent in Kingfisher, Oklahoma working for his brother-in-law and sister (Paul and Lucille Stiner). He followed the wheat harvest from Oklahoma to the northern United States at the end of each summer.

In 1951, Dale enlisted in the Navy Seabees and proudly served in La Crosse, Cuba, and Guam. He received an honorable discharge in 1955.

In 1952, Dale met the love of his life on a blind date. Dale and Rita (Hirt) exchanged eternal vows in 1956 at Holy Rosary Church in Medford, Wisconsin. The most important thing to Dale from the day he said I do, to the day he took his last breath, was taking care of his beautiful bride.

Dale graduated from UW Stevens Point in 1959 with a degree in Conservation. After graduation, he worked for the National Park Service. In 1963, Dale obtained his dream job as a Soil Scientist for the USDA. Before retiring in 1993, he moved his family 15 times due to transfers with his job. Dale had a passion for his job and took immense pride in the contributions he made to the Wisconsin agricultural community.

Dale and Rita had 4 kids, John (Mavis) Jakel of Chippewa Falls, Ann (Peggy) Jakel Stormoen of Sun Prairie, Karen (Lance) Hover of Friendship, Laura (Amy) Pascoe of Sheboygan. Dale bestowed upon his children Christian values, the importance of education, a strong work ethic, passion for the outdoors, and love of card games and ping pong (even how to cheat a little if needed). One of his greatest joys was watching the Cubs win the World Series. He found pleasure and fulfillment in the many hours he and Rita spent volunteering in Barron, Wisconsin.

Dale was very proud of all his beautiful granddaughters Mary Parker, Christine Wathke, Dr. Leah Hover-Preiss and Dayle Rhinehart. They had a very special place in his heart. He often told each one of them that she was his favorite. He was blessed with 5
great-grandchildren, Teresa, Adalyn, Emma, Aiden, and Harper. They find peace in knowing they have a special angel watching over them now.

He was welcomed into heaven by his daughter-in-law (Mavis), mother, father, 8 siblings (Arnold, Elmer, Elaine, Lucille, Carl, Bob, Dennis, and Beatrice), and his in-laws (Clara and Louis Hirt, Lester Hirt and Patty George) along with other family and friends.

Those here to carry on his legacy and share his many amazing stories include his wife, four children, four granddaughters, five great-grandchildren, in-laws (Bernice Jakel, Willis Duncan, Joan & Robert Ness) many nieces and nephews, and all the people he welcomed into his circle of family.

In lieu of flowers, donations may be made to Cure SMA at curesma.org or Cure SMA, 925 Busse Rd, Elk Grove Village, IL 60007. This charity was dear to Dale’s heart as his great-granddaughter lives with spinal muscular atrophy (SMA).