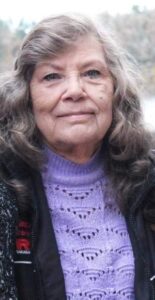 Delores was born on July 23, 1942 in Nekoosa, Wisconsin to Melford and Dorthy (Elgas) Streeter. She married Melvin Hanson on February 11, 1961 and they spent 60 loving years
together until his passing in April of 2021. She was blessed with four daughters: Debra (Phil) Kinney, Nekoosa; Terry (Pete) Hams, Grand Marsh; Kathy (Dave) Keach, Arkdale; and Tammy
(Chad) Hanson-Schenk, Chalmette, LA. Delores enjoyed spending her life with family and friends, hosting parties and cooking for anyone who stopped by for a visit. She loved the
outdoors and was able to spend her last summer at her Ponderosa Pines camper.

A celebration of life will be held at a later date.