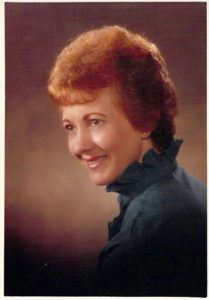 Doris was born on November 11, 1934, to Ross and Eva (Dressel) Roberts in Monroe Center, Wisconsin. She graduated from Adams-Friendship High School in 1952. After high school, she worked at Adams Marquette Electric Coop where she met her husband, Kenneth John Romell, when he came in to pay his parent’s electric bill. Doris and Ken married were married on September 25, 1954. Doris and Ken have one daughter. Sheila Romell. Later, Doris worked at Adams Memorial Hospital where she was the Business Manager for 17 years. In 1967, Doris and Ken purchased the Roche-a-Cri Drive In, which they operated for three years while both maintain their full-time jobs.

Doris was very active in her community. She served as a member of the school board and the Adams City Council. She served on many committees during her tenure on each of these elected positions. She also worked at the HUD Program in Adams, Wisconsin.

Doris was a very loving person whose generosity touched many people. She dearly loved all of her family and friends, of whom she had many. She was admired for her cooking, especially her pies and baked beans. She was also a wonderful housewife. She had many talents, including crocheting, quilting, and counted cross stitch. She gave many of her beautiful afghans and quilts to her family and friends.

Family and friends are invited to join Ken at the “Celebration of Life” party for Doris on September 14, 2019, at Cedar Shack in Adams, Wisconsin. There will be food and refreshments served from 1:00 P. M. to 5:00 P.M.