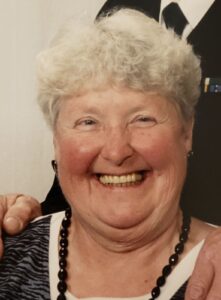 Dorothy was born September 01, 1941 in New London, Wisconsin to Albert Herman Radtke and Doris Anna (Dye) Radtke. She went to school at Adams-Friendship high school, graduating in the class of ‘59.

After graduation she headed west to California with her older sister Betty and soon met the love of her life, Leland Earl Freed “on the dock of the Bay” in San Francisco.  She married Leland (Lee) Freed on December 05, 1959 in Reno, Nevada and began her crusade as the wife and home-maker of a US Navy sailor.

Lee was in the Navy when they met and for the next 23 years theirs was one adventure after another.  From being stationed in Hawaii, San Pedro, California and Great Lakes Naval Academy in Illinois, each place brought new friends and new experiences.  San Pedro was her favorite and brought the most fond memories for her and her children.  They lived close to the ocean and according to Dottie “she loved her house” and spent many days at the coast.  Because Lee was TDY most of the time, Dottie was home with the “boys” and she had to take on the responsibility of being both mother and father, which made her stronger and appreciative of Lee when he came home – after a small adjustment period!

While stationed at Great Lakes Naval Base, Dottie was active in supporting the other Navy spouses, especially the ones of new recruits.  She organized and ran an on-base thrift shop to help support families.  It provided not only clothes and other necessities, but also vital support to the families of our brave naval service men and women including a family support newsletter – decades before personal computers were available!

After Lee retired from the Navy, he began a new career at Mercy Hospital in Janesville, Wisconsin which was their last relocation to Edgerton, Wisconsin.  Dottie & Lee lived in their home for 40 years and enjoyed gardening on their 2 acres of land.  Her love of gardening and gift of helping things grow has been passed down to her children who also have beautiful and plentiful gardens themselves.  Dottie’s gardens were diverse with many varieties of fruits and vegetables along with a large variety of plants and flowers.  She designed many garden beds that rivaled those of more famous renowned gardens.

While living in Edgerton, Dottie and Lee were active in the Boy Scouts of America scouting program and participated as leaders and went on many campouts and activities.  Two of her sons, Daniell and Jonathon, achieved the rank of Eagle Scout along with one of her grandsons, Benjamin as well.

Another passion was her love of rummaging.  She and Lee would go to auctions on the weekend and she would rummage during the week.  Her collections of glassware were large and impressive.  Her home was always full of beautiful curio cabinets that held the treasures she found.  Dottie and Lee were well known for their annual Labor Day weekend rummage sale.  People would come from Illinois and surrounding states just to see what treasures they would find.  Most of the kids also participated too, sometimes with 3 generations of Freeds contributing to the large and ever growing rummage sale.

Dorothy was a member of a Pulmonary Rehabilitation group at Mercy Hospital in Janesville, WI.  They called themselves “The Heavy Breathers Club” and did light workouts, usually followed by breakfast. She made many lifelong friendships and they became an important part of her life after the passing of her beloved Lee.  After moving to Baraboo, she missed them tremendously, but was able to make several visits and have lunch with her dear friends.

In her later years, when gardening became limited to her many potted Orchids in her Baraboo home, Dorothy enjoyed many online investigations such as archeology, both ancient and more recent histories.  She especially enjoyed her son Rob’s life-long passion for local Indian artifacts, legends and lore.  Like many others she had a grand curiosity of civilizations that populated the planet before our written history.  She was a prolific reader on the topic  both in book and web formats.  Her knowledge was extensive and she could converse intelligently with even the most educated in the field.  Some of her most cherished discussions were with her friends Uncle Duke  Seifeied & Annette Baker from Janesville. They routinely discussed such topics for hours.

Dorothy was preceded in death by her parents, Albert Radke and Doris Dye Radke

Celebration of Life for Dottie will be held on Sat March 26, 2022 @ noon at the Lounge1848 in Edgerton, Wi.  For additional updates: DorothyAFreed