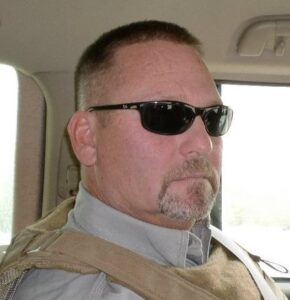 According to Douglas’s wishes, cremation rites will be accorded. Private family services and interment will be held at a later date. In lieu of flowers, a memorial to the American Cancer Society or the donor’s charity of choice can be made.

Douglas was born August 26, 1959 in La Chapelle – St. Mesmin, France to Donald Gene Stillwell and Laura Minnie Ebker. Douglas grew up in Union, MO and Effingham, IL before enlisting in the military. Douglas was part of the 82nd Airborne and participated in the Invasion of Grenada. After his military service, Doug attended Eastern Illinois University where he obtained his Bachelor’s Degree.
Douglas was a traveler and loved a good adventure. He spent the better part of his career in construction management, working on major projects for branches of the military. His career took him all over the United States and he also spent time in Afghanistan at Bagram Air Base. Douglas loved his time in New Orleans, Honolulu, Alaska and Seattle to name a few.

Douglas enjoyed riding his Harley Davidson, rock music, and walking his beloved dog Lexi. Douglas was a member of the American Legion and an avid supporter of PBS.

Douglas was preceded in death by his parents and brother, James David Stillwell, aunts, uncles and cousins. He is survived by his sisters, Lanicia Gibson of Union, MO, Tecla Winfrey of Indianapolis, IN, and Brenda Stillwell of Albuquerque, NM; brother Robert Stillwell of Chino Hills, CA, brother Jay and sister-in-law Amy Stillwell of Oviedo, FL.; step-mother Faith Stillwell of Indianapolis; a much-loved Aunt and Uncle Dave and Mary Stillwell of Gilbertsville, KY; along with many loving nieces and nephews.