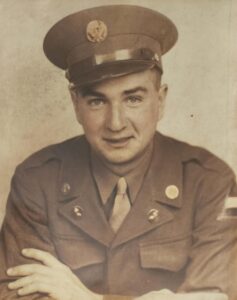 Ed was almost 94 years old when he died, something that he was personally amazed by.  He was born June 20th, 1928 to Andrew, Sr. and Julia Baron.  He was their 9th and last child that survived to adulthood.  He was very close with his family and enjoyed getting together with his brothers for family gatherings or to help on projects.  He loved visits from his children and grandchildren after his retirement.   He received his education from the local schools in the Adams area, attending the old one room school house, and when he was 18 he joined the Army.  After Basic training he was stationed in Hawaii.  After his 3 years with the Army, he returned home to Grand Marsh and spent 2 years helping on his family farm and doing various local jobs.

Ed moved to Kenosha to work at AMC and while helping build his brother’s home in Kenosha, he met the neighbor’s daughter and love of his life, Angeline Schaffer.  Their love blossomed, and they were married on May 5, 1956.  After relocating to Milwaukee he joined the Milwaukee Police Department (MPD) where he was promoted to the rank of Sergeant; a job that he loved.  Ed enjoyed hard work and providing for his family.  He would do extra jobs such as helping the neighboring masons as a laborer, roofing homes and repairing cars.

Together, Ed and Angie were blessed with 7 children, 6 of whom survived to adulthood.  Their 4th child, daughter, Barbara, passed away at the age of 4 from cancer.  Together they were excellent and supportive parents.  Ed always credited Angie with being an excellent wife and a role model for their children.  They were strong in their faith and members of Our Lady of Sorrows Catholic Parish in Milwaukee where they raised their family.  He retired from the MPD after 36 years of dedicated service.  Ed and Angie then built a home in and moved to Friendship, 5 miles from the farm where he was born and raised.  During his “retirement”, Ed was elected to two terms as Adams County Coroner and was the Adams County Animal Control Officer for 18 years.  He also enjoyed digging graves by hand at 2 local cemeteries with his good friend, Larry.

Ed and Angie were very supportive of one another.  Ed was always concerned about Angie’s wellbeing and protection.  In fact, he “cheated” death more than once driven by his love for Angie and his need to be there for her. They were married for almost 66 years.  Ed answered God’s call to heaven 9 days after Angie’s passing. We believe he died of a broken heart, only holding on for 9 days for the sake of his children.   As one grandson put it, “it wouldn’t be good for Grandpa to be away from Grandma for very long.”  No truer words were ever spoken.

“Big Ed” absolutely enjoyed being outdoors and working hard.  His favorite hobbies were gardening, taking care of animals and cutting firewood.  He had a very large and beautiful garden which was meticulously maintained and provided a bounty of food and enjoyment for his family.  He and the garden were very productive providing enough produce to donate in excess of 500 pounds of produce in good years to the local food pantry.  He was very proud of it.  He also enjoyed hunting with his family at the farm and taking care of the cattle.  He named the cattle as if they were pets and would spend hours with them. He enjoyed all animals, but especially his dogs, Baron and Snuffy.  Ed was also a member of St Jude’s League, the Milwaukee Police Supervisors Organization as well as the Sheriffs and Deputy Sheriffs Organization.

“Godspeed my love until you are mine again.”

The family would like to express appreciation to all of the caregivers who meant so much to Ed and Angie and cared for them during the difficult time of the pandemic.  We also cannot begin to express the extent of our appreciation and love to Marcy, Tomasa, and Ann, caregivers, who were at Ed’s bedside in spring 2021 when he beat death, and again in spring 2022 when he lost the love of his life and passed from this earthly life to his eternal resting place in heaven.  Marcy and Tomasa, you are true angels on earth, caring for our father as if he were your own, showing him as well as us true love and compassion.  We have all been blessed by knowing you!  Thank you.

In lieu of flowers, memorials may be made in Ed’s honor to St. Jude’s Children’s Research Hospital or the Adams County Humane Society.