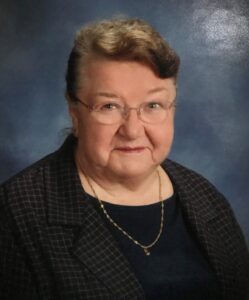 Esther was born in Oak Park, IL on January 18, 1936 to Rudolph and Dorothy Schroeppel. She was confirmed and graduated from grammar school in 1949 and graduated from Oak Park High School in 1953. After graduation she worked for Continental Assurance Co. and St. Paul Federal Savings & Loan. While working at the Savings & Loan, Esther met Leonard Suhr and they were married on May 16, 1958 in River Forest, IL. They made their home in Oak Park and Lombard, IL before moving to Adams in 1973.

Esther was a homebody at heart and enjoyed jigsaw puzzles, reading, crafting, sewing and baking. She especially loved making lots of Christmas cookies every year which she gifted to her neighbors, family and friends.

Esther was a member of Immanuel Lutheran Church and served on the Alter Guild and maintained the Communion Roll for many years.

Esther was preceded in death by her husband Leonard, her parents, Rudolph and Dorothy Schroeppel, her brothers David and Roger Schroeppel and brother-in-law Richard Suhr.

Interment will be at the Chapel Hill Gardens West Funeral Home and Cemetery, Oakbrook Terrace, IL at a later date.

Memorials may be directed in Esther’s memory to Immanuel Lutheran Church.