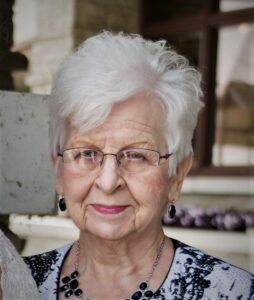 Born the middle child of five and a half-dozen children (her father’s humorous way of saying 11) to Hans and Hilda Pedersen of Arkdale, Wisconsin, on June 23, 1930, Esther grew to adulthood amongst a large, loving farm family in Adams County.  She spent her early years working and playing alongside her siblings, going to Adams County schools,  and attending services at the Trinity Lutheran Church of Arkdale,  Wisconsin, where she was both baptized and confirmed. Esther graduated from Adams-Friendship High School in 1948.  One evening when she was 19, Esther’s sister Virginia and her boyfriend Garland introduced her to Fred Byron Stevens at the Spot in the Woods, a local dance hall. The two were soon swaying together to The Blue Skirt Waltz, while Virginia and Garland slipped away into the night. At first forced to accept a ride home with Fred, Esther soon fell in love with the young Army Reservist from Castle Rock. They were married just months later on December 17, 1949 in the sanctuary of Trinity Lutheran Church with Virginia and Garland standing with them as the best man and maid of honor. All seven of Esther’s sisters participated in the ceremony.

The couple moved to Lake Benton, Minnesota a few months after the wedding only to return to Arkdale when Fred received orders to report for active duty during the Korean Conflict. Esther resettled into her parents’ home while Fred shipped out, first to Fort Lewis in Washington state. She was able to travel to visit him in Washington before he left for Korea.  While Fred was overseas, Esther spent time preparing for the birth of their first child, Fred Byron  Stevens, Jr., who was born in May, 1951. Esther wrote Fred letters, sharing photos and stories of little Freddy, and she prayed for her husband’s safe return. He did return to her, after suffering shrapnel wounds from enemy fire. Upon Fred’s return to the states, the family moved from Arkdale to Kenosha, Wisconsin. Esther was pregnant with their second child in 1952 when both were struck with polio. They sent Freddy to stay with Fred’s parents while the couple admitted themselves to the local hospital’s polio ward. Esther remembered being in that ward, where nurses closed the hallway doors of the rooms whenever someone passed away from the disease. They both recovered and returned home, and the following January, 1953 they welcomed the birth of Ronald David.  The couple also welcomed a daughter, Debra Jayne, in November of 1954 and enjoyed their little family.  Five years later in 1959 Esther gave birth to Susan Kaye followed by Jeffrey Wayne in 1960. Their family now complete, Esther and Fred worked to rear the five siblings with love, security, a sense of integrity and, most importantly, a sense of humor.

Esther worked tirelessly to make their house a home: cleaning, baking, sewing, teaching, and sometimes acting as referee. When Jeff started kindergarten Esther returned to school to learn keypunching at Kenosha Technical Institute. After she finished her classes, she joined Cooper’s, now Jockey International, in the data processing department, entering information into the system via punched cards that helped process orders from all over the world on computers the size of large rooms. She continued to work at Jockey for more than 20 years, retiring after the company phased out the key-punching due to technological advances.  Esther and Fred purchased land on her father’s farm during the 1980s, and they built their retirement home in Arkdale where they returned after Fred finally retired in 1989. Esther had always wanted to return home, and they now lived next-door to Virginia. Esther was pleased to rejoin the Trinity Lutheran Church and became active in the Strongs Prairie Community Club, to which several of her sisters also belonged. She and Fred were also active members of the local VFW post and the Military Order of the Purple Heart.

During their retirement, they enjoyed many visits from their children. They entertained their grandchildren with week-long stays at Grandpa and Grandma’s house or with trips to their other favorite place, Beaver Lake, near Hayward, Wisconsin. Esther enjoyed baking and playing cards and board games with her family as well as shopping with her sisters. She and Fred also enjoyed sharing the daily crossword puzzles in the newspaper.
Esther suffered a fall at home in 2010, and due to her injuries and Fred’s advancing Alzheimer’s disease they moved back to Kenosha to be nearer to their children and grandchildren. Since that time, their children have provided ongoing support and care as the couple moved from a senior living apartment to assisted living facilities. Fred passed away in 2017. The couple spent 67 happily married years together.  Those welcoming her into heaven this day include her parents and parents-in-law, husband, Fred Byron
Stevens, Sr., siblings Norman, Roy, Caroline (Henricksen), Viola (York), Virginia (Chaffee), and Verna (Williams), brothers and sisters-in-law, Warren Stevens, II, Thomas Stevens, Robert Stevens, Robert Hedman, Sr., Kenneth Henricksen, Eleanor Pedersen, Beryl Pedersen, Clarence York, Garland Chaffee, Frank Williams, Helmer Lecy, Ed Koehler and Clinton (Bud) McKinley, and nephews Dennis Henricksen, Richard Pedersen, Donnie York, Randy Williams, Loren Lecy, and Ronald Williams.

The immediate family will share a brief, private farewell due to pandemic circumstances, but they will share a special service video through the funeral home online. A special celebration of life will be planned at a later date in Arkdale, WI when we can safely gather together. The family requests that any memorials be sent to the Arkdale Trinity Lutheran Church, 1650 Church St., Arkdale, WI 54613 or Library Terrace 7905 – 36th Avenue, Kenosha, WI 53142.