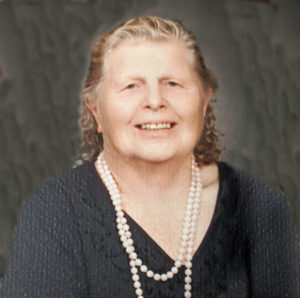 Esther Mae (Blanchard) Hicks, age 87, of rural Grand Marsh passed away at home, surrounded by her children, on March 1, 2020.
She was born on May 25, 1932, in upper Michigan to Ken and Caroline (Curtis) Blanchard and grew up in Wisconsin Rapids. On July 8, 1950, she married Roy W. Hicks. Esther was a homemaker and also worked in the community as a restaurant manager, fabulous cook and baker, nursing assistant, and her favorite position for many years as the cook for Head Start. She was a member of the United Church of Christ, Grand Marsh and Grand Marsh Harmony Homemakers Club for many years.
Esther had a gentle nature and loved people, especially children. She enjoyed her family, pets, gardening, travel, nature, and rummage sales. She had an adventurous spirit.
She is survived by her son, Roy J. and four daughters, Kay (Dwane) Braken, Peggy (Norman) Burgette, Sandra (Ron) Breth, and Joan (Jim) Etchberger. Twelve grandchildren, twenty-nine great-grandchildren, and three great-great-grandchildren. Two sisters, Agnes Schroeder and Barb Quinnell, one brother Jerry (Diane), and several nieces and nephews. She is preceded in death by her husband, Roy; son, Fred; parents; sister, Margaret Kobishop; and brothers, John and Howard.
A memorial service will be held at Roseberry’s Funeral Home with Pastor Janet Ruark officiating on Saturday, March 7th at 11:00 a.m. with gathering of family and friends starting at 9:30 a.m.
The family would like to gratefully acknowledge the Agrace Hospice Care team for their professionalism, compassion, and many kindnesses. In lieu of flowers, memorial giving can be made to Agrace Hospice & Palliative Care, 5395 E. Cheryl Parkway, Madison, WI 53711 or online at (agrace.org/donate).