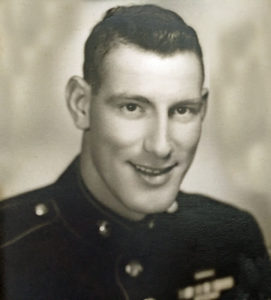 A private graveside service at Fordham Cemetery will be held at a later date.

Francis was born on October 14, 1933 in Town of Richfield, Wisconsin to Paul and Gladys (Bisby) Reichoff. When Red was 16 years old he went to work at the Powder Plant, building railroads for the first summer then building construction for three-plus years. Red then joined the Marine Corps and traveled the world, mostly in the far east, Japan, served in the 1St Division in Korea and made rank of Sergeant. After Korea, he met Betty while home on leave and knew then he wanted to have a family. He married Betty Lou Baumel on September 24, 1955 in Burbank, California. Red was stationed in Camp Pendleton in Oceanside, California where he and Betty resided off base for one year. They moved back to Wisconsin to raise their family and were happily married for 56 years until the time of Betty’s death in 2012.

Red was a devoted husband, father, grandfather, and great-grandfather who loved spending time with his family, especially with all his grandchildren.

Red had various jobs, the longest being in road construction, 19 years, with Scott Construction. He worked his way up from laborer to foreman /supervisor for most of his time with the company. During the summer and winter Red could always be found working in woods cutting pulp and firewood.

Following Red’s retirement from Scott Construction, he and Betty partnered together and went back to one of his all-time passions – dairy farming, which they both loved and Red had the best farmhand he could have had – Betty. They won many awards for their outstanding quality of milk.

Red also served on the Adams County Board of Supervisors, serving on the Highway Committee, Emergency Government, Service Officer and Law Enforcement Committees.

After retiring from farming, Betty and Red enjoyed gardening, traveling, visiting family, fishing with Betty, hunting, going to National Parks, and relished nature and wildlife that he captured on videotape from on the road as well as what had surrounded them on the farm.