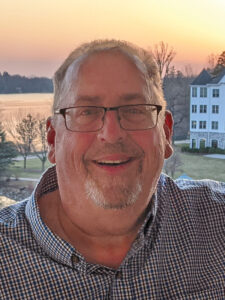 Gary, the son of James A. and Marie E. (Pfragner) Redlin, was born on April 3, 1956 in Hartford, WI.  He moved to Baraboo with his family in 1959 when his father was employed by the Schieble Funeral Home.

Gary attended both elementary and high school in Baraboo, graduating in 1974.  He attended MATC in Madison and received an Associates Degree in Police Science in 1976.  In October of 1977, he was hired as a patrolman with the Baraboo Police Department.  In June of 1981, he left the Police Department to join his father in the funeral business.  He received his degree in Mortuary Science from MATC-Milwaukee, graduating in 1983.  He worked along with father, James Redlin, until Jim passed away suddenly while vacationing in Florida.  Gary then took over the business and operated it, along with his wife, Sandy, until May of 2016 when his health forced him to retire.  He was dedicated to his profession and strived to continue the work ethic his father instilled in him.

He is survived by his wife of 40 years whom he loved deeply, Sandy, of Baraboo; his son that he was so proud of Kyle Redlin and his wife, Angie Bristol, of Madison; his sisters, Sue Hagedorn and Barb (Paul) Krueger, both of Baraboo; his mother-in-law, Adeline Gibbons of Cuba City; his sisters-in-law, Joyce Gibbons of Machesney Park, IL, Pat (Ron) Rod of Rosenberg, TX, Kathy (Daryl) Kubitz of Cuba City, and Grace (Steve) Heller of Apple River, IL; his brothers-in law, Jerry (Sheila) Gibbons of Darlington, Pete (Kim) Gibbons of Clinton, IL, and Ron (Betsy) Gibbons of Altoona, IA; 21 nieces and nephews and their families; other relatives and many friends.

He was preceded in death by his parents, Jim and Marie Redlin; his father-in-law, John Gibbons, his brother-in-law, Bill Hagedorn; brother-in law, Chuck Gallagher; and nephew, Benjamin Gibbons.

Gary had been a member of St. Joseph’s Church, Baraboo Elks Lodge #688, Baraboo Kiwanis, the Knights of Columbus, the Gold Wing Road Riders Association as well as several professional organizations.  He had also been a participant with the Team 3 Cardiac Rehab Group at St. Clare Hospital for the last 24 years who he considered his “other” family.

Gary had requested that memorials be made to the Cardiac Rehab Department at St. Clare Hospital in Baraboo.