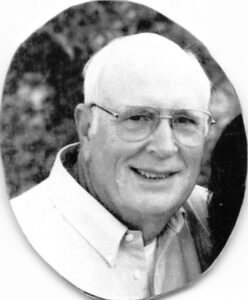 Gerald “Jerry” Reichhoff passed away peacefully at his home, with his loving wife Gloria, and family by his side on 11/14/21. He was born on the family farm in the township of Easton over 90 years ago. He loved life on the farm where work was hard and done with horses.

Jerry graduated from Adams Friendship High School. Later, he joined and proudly served in the U.S. Navy alongside his older brother during the Korean Conflict for 4 years. He was a banker for over 35 years retiring as Vice President of the National Bank of Waupun and enjoyed working with the community. Jerry was a member of the White Creek Congregational Church.

A happy family man, Jerry is survived by his wife Gloria, son Ron (Sue), and daughters, Noma Ramsett and Joanne Hamberger. Also mourning his loss are 7 grandchildren, 14 great-grandchildren and 3 great-great-grandchildren. The great-grandchildren affectionately referred to him as “Grandpa with the blue tractor”, who was always giving joy-filled wagon rides to family and friends. His passion since a teenager was planting pine trees, setting out over 250,000 during his lifetime!

Jerry was preceded in death by his daughter, Debra Bleich, great-grandson, Rashi, parents, Ernest and Margie Reichhoff, brothers, Charles and Dale, and sisters, Clara, Audrey, and Doris.
People wishing to honor Jerry’s lifelong commitment to family and community can make a donation to the Parkinson Disease Foundation.
Send all donations to:

Roseberry’s Funeral home is serving the family with services to be announced and held at a later date. Visit www.roseberrys.com for online condolences and further information.