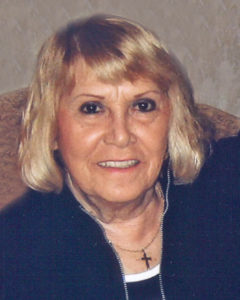 Visitation will be from 2:00p.m. until 3:45p.m. on Thursday, November 15, 2012 at Roseberry’s Funeral Home.  A prayer service will be at 3:45 p.m. with memorial services immediately following. Father James P. McNamee will officiate.

Geraldine was born June 7, 1932 in Harvey, Illinois to Michael and Mildred (Potrebih) Dejanovich.

She married Danny Joe Johnson on December 31, 1988 in Lansing, Illinois.

Geraldine worked at Hemingway Engineering as a full charge bookkeeper for 30 years in South Holland, Illinois.

She loved spending time fishing with Papa Joe, her flower gardens, working out at Curves, and especially being with her Great-Grandson, Hayden.

In lieu of flowers her family would appreciate monetary donations to offset medical & funeral expenses.