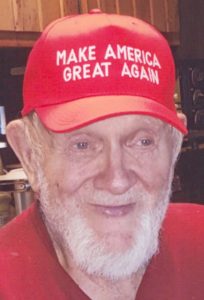 Gordy was born in Milwaukee Wisconsin on August 8, 1930, to Evelyn (Kroening) and Walter Vosz.  He went to Juneau High School in Milwaukee.

After high school, he acquired his 1948 Harley Davidson and became well known to the neighbors, bars, and girls.

He met his first wife, Marge Sagorac, just as the Korean war was about to call up soldiers from Wisconsin.

In 1951-1952 Gordy served in the VMF-513 Marine All-Weather Fighter Squad in Korea a Buck Sargent-Crew Chief with the Corsair F4U.  His unit became known as The Flying Nightmares and around the clock, bombing became his job.

Gordy was honorably discharged in October 1952 and came home to Milwaukee.  He worked as a painter for the Milwaukee Road Railroad, a welder for AO Smith and an entrepreneur as he started his own tree cutting business.  Some of the biggest elm trees met his saw during the Dutch Elm disease era in Milwaukee.

When Gordy wasn’t working, he was hunting and fishing up north in Wisconsin, out West or in Canada.  His collection included elk, mule deer, whitetails, black bear and his most favorite – moose.

He collected over 12 moose in his lifetime and his hunting buddies did much of the same.

In 1975 Gordy settled in Big Flats Wisconsin and started Big Flats Log Homes.  To his credit, over 30 cabins sawed and built, including over 800 logs for the Petenwell Lodge.  Many of his best friends were his employees.  Gordy was a man that lived life his way. Nothing ever kept him down!  The undertaker probably wondered why he was still smiling!

Interment will be at the Northern Wisconsin Veterans Memorial Cemetery in Spooner, Wisconsin at a later date.