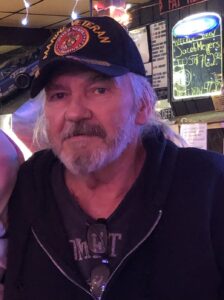 Graveside services with military honors will be 1:00 p.m. Sunday, October 3, 2021, at the Mt. Repose Cemetery in Friendship. A celebration of life will follow at Who Cares Bar.

Gregg was born September 9, 1955, in Rhinelander, Wisconsin to William and Mildred (Dales) Jensen. He served in the United States Marine Corps from April of 1985 until he was honorably discharged in April of 1988. Gregg married Sherry Russ on January 29, 1986, in Chula Vista, California. He retired from the Oxford Federal Correctional Institution in July 2008.

Gregg enjoyed spending time with his friends and family, telling jokes while enjoying a cold beer at Who Cares and cheering for his beloved Raiders.

Gregg was preceded in death by his wife Sherry, mother Mildred and father William. Brothers Bill, Terry and Doug, and his sister Cheryl.