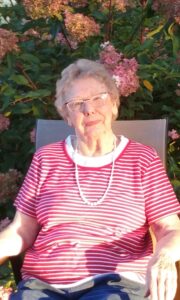 Harriette Ruth (Marnholtz) Young, passed away on September 11, 2022, just one day shy of her 94th birthday, at the home of her granddaughter, Megan Maurer, where she had been living since the beginning of the pandemic in April 2020. Harriette was born on September 12, 1928, in Elkhorn, WI, to Henri and Clara Marnholtz. She attended and graduated from Delavan High School. She met James Young in Delavan where she was working in the hardware store, and they were married on June 22, 1949, in Washington State at the military base. When James returned from serving in the Korean War, they made their home in Whitewater, WI, while raising six children. Harriette and James owned and operated Young’s Clover Farm Store and later Young Insurance Agency, along with real estate rental properties over the years. Harriette also worked at Whitewater Electronics and Commercial Bank, where she was head bookkeeper.

Upon retirement, Harriette and James moved to Adams-Friendship, WI, where they built their “little home in the big woods.” Harriette enjoyed spending time at the golf course, whether it was golfing or playing cards, cribbage being her favorite. Harriette loved sewing, crafting, crocheting and knitting. She would take her creations to many craft fairs over the years.
A few years after James’ passing, Harriette moved to Janesville to be closer to her daughters. There, she joined a local Knitting Grandmas club. Harriette knitted many afghans for area veterans and those in need, and baby hats for hospital nurseries.

Harriette enjoyed family time, whether it was playing dominoes, going out to eat, showing off her craft projects, or just visiting and sharing stories.

She was preceded in death by her husband James, her parents Henri and Clara Marnholtz, son Randall Young, daughter Cynthia Young, and sister Leda.

A private graveside service will be held at a later date, with burial in Mount Repose Cemetery, Friendship, WI. Roseberry’s Funeral Home in Friendship is assisting the family. Harriette’s family would like to acknowledge and thank her granddaughter, Megan Maurer and family, for bringing her into their home and the loving care they provided in her last years, and also the assistance and compassion of Agrace Hospice in Janesville, WI.