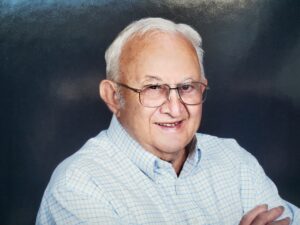 A Memorial Mass of Christian Burial will be 11:00 a.m. on Monday, September 13, 2021, at the St. Joseph Catholic Church in Friendship, Wisconsin. Father David Bruener will officiate. Interment will be at the St. Leo Catholic Cemetery. Visitation will be 10:00 a.m. until the time of service on Monday at the Church.

Ivan was born August 30, 1931, in Madison, Wisconsin to James and Christine (Seiler) Morrow. He graduated from Sun Prairie High School in 1949, and from UW Madison with his Bachelor’s degree 1953. In 1956 he earned his Master’s in Agriculture. Ivan married Joyce Ann Hoffer on July 16, 1960 in Immaculate Heart of Mary Catholic church in Madison, WI. Ivan worked for Adams County from 1953 until 1985, and as the 4H & Youth Agent. He was inducted into 4H Hall of Fame in 2014. Ivan served as chairman for the Town of Preston, served on various committees for the Adams County Board, the Fair Board, the Hospital Board, and was a member of the Historical Society. He also performed hunter safety training for over 35 years.

He grew up on the family farm in the Town of Burke, Dane County, Wisconsin. The time spent on the farm fostered his love of the outdoors. He was an avid fisherman both locally and in Canada. Ivan traveled to Atikokan, Ontario every year from 1990 to 2014 where he fished with family and friends. Ivan also loved to hunt for grouse and deer. He loved to garden. Ivan liked to travel and enjoyed trips to the Rocky Mountains and East Coast. Most especially Ivan loved spending time with his family.