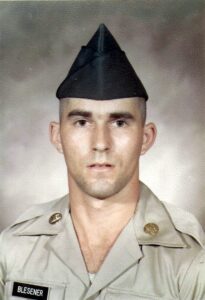 Private graveside services will be held at the East Arkdale Cemetery in Arkdale, Wisconsin. Pastor Terri Skildum will officiate. Military honors will be presented by the Adams County Honor Guard.

James was born June 24, 1946 in Minnesota to Avitus and Melvina (Wondrasch) Blesener. The family moved from Minnesota and owned a dairy farm in Wisconsin. James later began working at cranberry marshes. His experiences allowed him to operate large machinery, harvest crops, and spend much time outdoors.

James was in the U.S. Army and served during the Vietnam War.

James looked forward to county fairs and passed time watching classic comedies. Raising animals and having pets was a big part of his life. James would have long conversations with his pets, fostering them like a parent. Family and friends were gold to James. He would always engage in lighthearted conversation and laughter surrounded by loved ones.

Special thanks to Tim Buchanan and Gene Schilling for support throughout the years.