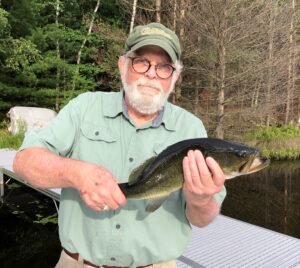 There will be a private service at a later date.

Jim was born in Pekin, Illinois to Robert F. and Marion C. (Van Scoy) Sheppard. He attended St. Edward Catholic High School in Elgin Illinois, and worked for the City of Elgin for more than 30 years. On December 01, 1973, Jim married Verna Lee Elgan, whom he loved deeply, in Elgin, Illinois. The two were married for 47 years and had two sons, Conor and Patrick, and four grandchildren that he adored: Arthur, Colin, Oliver, and Eloise.

Jim enjoyed fishing, cooking, had a deep appreciation for all things musical, and immensely enjoyed holding his grandchildren.

He was a member of the Monroe Prairie A.T.V. Club and Ducks Unlimited and was the founder of the Dellwood Sportsman & Social Club.

In lieu of flowers, please consider making a donation to the Mesothelioma Applied Research Foundation in his name.

The family is grateful for the thoughts, prayers, and comfort they have received.

“Fill to me the parting glass
And drink a health whate’er befalls
Then gently rise and softly call
Good night and joy be to you all.”