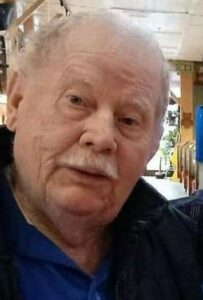 Interment will be at the East Arkdale Cemetery, Town of Strongs Prairie, Adams County, Wisconsin at a later date.

Jim was born August 27, 1937 in Mokena, Illinois to Orville Hohenstein and Berniece F. Rick. He never stopped learning he believed education was key to success and expanding one’s mind to new experiences. His travels have taken him across the United States, but always back to his roots in Illinois and Wisconsin where he felt he could make a difference in the people he associated with and the communities that surrounds him. Jim married Sylvia J. Warp on March 18, 1984 in Friendship, Wisconsin. He was a hard worker and had a long work history that included: Land and Property Superintendent in Cook County Chicago Illinois (69′-74′), Rode Ranger Station supervisor ( 75′-77′); Wilmax, Corkery, Durn Law and Property Management Chicago Illinois :(77′-82′); Grounds and Track Manager of the Wisconsin Dells Greyhound Park for owner Tommy Bartlett. (86′-96′); owner of Hohenstein LLC.-35yrs Lawn Care and Snow removal for Adams County; and Adams-Friendship School District 2008-2017.

Most would think Jim took it easy in retirement, but that would be far from true. He enjoyed volunteering his time as a crossing guard at the Hwy 13 intersection in front of the Middle school where he greeted everyone and kept another generation of A-F students safe. Jim loved associating with newer generation and understanding how things and time don’t really change all that much. But how we need to change how we see things. Jim’s hobbies included attending and supporting high school sports, his grand kids, fishing, hunting, and community events. If Adams Friendship had an event going on, He was sure to be there cheering on all the A-F athletes.

Dad enjoyed being outside and moving amongst the crowds of people. He never made it 10 steps without sparking a conversation.

Memorials may be directed in James’s memory to his home in Adams.

James was preceded in death by his parents: Orville and Berniece Hohenstein; and his wife, Sylvia.