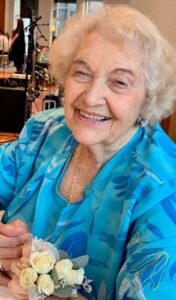 Jeanette was born June 5, 1928, in Aurora Illinois, where she grew up and attended East Aurora High School and met her husband Donald. They married on June 29, 1946. When Donald retired in April of 1989, they moved to a home in the Lakewood subdivision near Castle Rock Lake.  They enjoyed living in what they called their “little house in the woods”.  They bought a motorhome and spent their winters in San Benito, Texas for many years.  After Donald passed, she eventually moved to Adams, Wisconsin in 2007 where she stayed until her passing.

Jeanette was a devout Catholic and a member of St. Joseph Catholic Church.   She was involved in many church activities and was a soprano in the church choir for many years.
While in Illinois, she served as a secular Franciscan and then continued her service for 32 more years in various leadership roles as a secular Franciscan of the Wisconsin Rapids.
She also loved & cared for animals of all kinds and never missed cheering on the Green Bay Packers.

She was preceded in death by her parents,   husband Donald of 47 yrs.,  a brother Carl, daughter Linda, and son-in-law Michael.

A memorial service will be held at St Joseph’s Catholic Church in Friendship, Wisc. at 11am on Feb 11th.  A family service and Internment will be at a later date in Illinois.