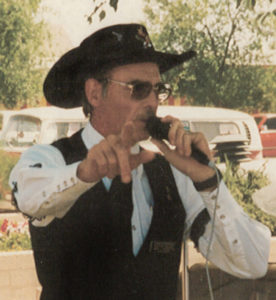 Memorial services will be 2:00 p.m. on Saturday, August 24, 2019, at the Arkdale Trinity Lutheran Church in Arkdale, Wisconsin. Pastor Terri Skildum and Chaplain Wess will officiate. Visitation will be 1:00 p.m. until the time of service on Saturday at the Church. Friends are then invited over to John’s Home, 1944 Cottonville Drive, Arkdale, WI – friends are welcomed to pass a dish.

He graduated in June of 1956 from Sandwich High School in Illinois. John enlisted in the United States Navy at the age of 17 while still in High School and then after graduating he served from June 13, 1956 until being honorably discharged on June 27, 1956.

He married Janet L. Hittle on November 24, 1974, in Madison, Wisconsin. They moved to Arizona in 1976
where he started his business, J. Bar Products Intl. Inc- Barrel-Lite. On April 1, 1984, he went to the Missouri Auction School in St. Louis where he graduated with the honorary title of Colonel. In the summer of 1989, he and Janet moved to Adams County.
John enjoyed fishing, hunting, and going to & putting on gun shows.
He was a member of American Legion Post #442 in Wisconsin Rapids.
John was preceded in death by his father, John C. Barber Sr.; mother, Jeanette; stepmother, Hazel Barber; stepson, James Franklin Hastings and stepdaughter, Janet L. Hastings-Fyffe.