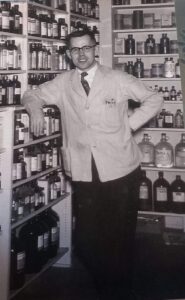 He served as a Naval Officer in the Pacific Theater in WWII aboard LST 903 including campaigns in Okinawa and Occupation of Japan.

Attended University of Eau Claire, Lawrence University, and graduated from University of Wisconsin School of Pharmacy in 1949. Owned and operated pharmacies for many years in Beloit and Monticello Wisconsin.

After semi-retiring, he worked as a part-time Pharmacist for Walgreens in both Arizona and Wisconsin. With his wife, Magdalen, he spent many winters in Arizona and summers in Madison and La Crosse, until settling year around in Arizona.

Per Joe’s wishes, there will be no service.

The family would like to thank the staff and volunteers of the Monroe Hospice Home for the exceptional care given Joe during his time there.