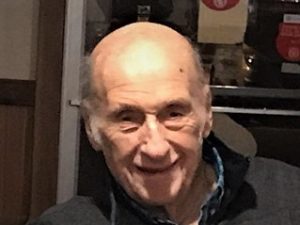 Kenneth John Romell, 92, of Pewaukee, Wisconsin (formerly of Adams, Wisconsin) passed away on March 18, 2020, at Angels Grace Hospice in Oconomowoc, Wisconsin.
Kenneth Romell was born in St. Paul, Minnesota on January 5, 1928. He was the fourth son of Louis Charles and Kathryn June Romell. In 1931, the Romell family moved from their home in Superior, to the farm south of Adams just west of “Silo Corners.”
Kenneth attended grade school at Jackson, Jt. School Dist. #7, a single room school, for eight years. He then attended Adams-Friendship High Scholl and graduated in 1945.
In 1948, Ken left the farm and went to work for Allis Chalmers in Milwaukee. He was drafted into the Army in September 1950. He was sent to Fort Knox, then Camp Polk, Louisiana, as“filler” for the 45th Division which had just been activated. Ken was then placed in Headquarters Battery in the Radio Section. After basic training, the 45th Division was sent to Japan for field training, after which they were transferred to Korea replacing the 1st Calvary on the front line. Ken was rotated home in June 1952 with an honorable discharge in August. In 2014, Ken and his daughter Sheila, took the Honor Flight to Washington, DC to honor his service, and they returned home to a parade which over 50 of his family members and friends attended.
After trying a few different jobs, he decided to hire out on the CNW Railroad “for a couple of weeks.” Thirty-seven years later, he retired.
At about the time Ken hired out as railroad brakeman (and later conductor), he began paying the light bill at the REA. It was there he met the love of his life, Doris Romell, who worked in the office. His brother, Bob, often teased him for volunteering to pay the bill. Ken and Doris married on September 25, 1954, bringing their only child, Sheila, into the world in 1963.
In 1967, Doris and Ken purchased the Roche-a-Cri Drive-In, which they operated for three years, while they both maintained their full-time jobs.
After Ken retired from the railroad in 1990, he was elected to the Adams City Council. In 1999 he was elected Mayor of Adams, with his grandson, Erik, as his campaign manager. He held the office of mayor for ten years during which the City of Adams had many improvements including updates to the sewer and water structures. Ken also spent six years on the school board, and four years as a supervisor for the Town of Preston.
Ken had many interests, including hunting, fishing, outdoor activities, and spending time with friends and family. Ken enjoyed dining out and often took family and friends to a new “hot spot” he found during his travels. He knew the best Chinese restaurant in Milwaukee, where to find broasted ribs or drunken chicken, best custard, tastiest pizza, cheese fondue, great salad bars, and which restaurants served appetizers in the lounges. Ken also liked to travel with Doris to Mexico, Florida, the Caribbean, and Las Vegas. In later years, he traveled with Sheila and her family to Mexico quite often.
Ken was dearly loved by his family and many friends. He would often entertain them with songs on his harmonica or reciting poetry. He also loved a good game of cards. He had a positive attitude, a great sense of humor, and zest for life. He was 32nd Degree Mason as a member of the Adams Lodge, and many will remember buying chop suey tickets from him.
After Doris passed away in July 2019, Ken lived with Sheila and Dale, her husband, in Pewaukee. Ken had a bucket list and they became adventurers most weekends traveling to many different areas of the state.
Ken was preceded in death by his wife, Doris Romell (Roberts), his parents, Louis Charles Romell and Kathryn June Romell (Engle), his brothers Ralph Romell and Robert Romell (Elizabeth), his sister-in-law Geraldine Romell (Louis), his brother-in-law Gale Roberts and his beloved nephew, Randal Roberts. He is survived by his daughter, Sheila Romell (Dale Vanden Heuvel), grandson Erik Vanden Heuvel, brother Louis Romell, sister-in-law Elizabeth Romell, sister-in-law Doris Roberts, nieces Sherry Haase (John), ), Carole LaForge, Cindy Roberts, Roxanne Romell, Rhonda Romell and nephew, Richard Romell (Kathy). He is also survived by grand nieces and nephews, and his many friends who will miss him.
A celebration of Ken’s life will be planned for later this spring/summer in Adams.
Bookmark the permalink.