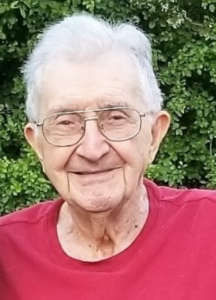 Lawrence Anthony Hodan, age 89, of Adams, Wisconsin died Monday, May 11, 2020 at House of the Dove Hospice Home in Marshfield, Wisconsin with his daughter by his side.

Graveside will be 1:00 p.m. on Friday, May 15, 2020 at the St. Leo Catholic Cemetery in Friendship, Wisconsin. Father Francis Dias will officiate. Military honors will be presented by the Adams County Honor Guard.

Lawrence was born May 24, 1930 in Adams, Wisconsin to Albert and Katherine Hodan. Larry was a 1949 graduate of Adams Friendship High School. Larry was inducted into the Adams Friendship Athletic Hall of Fame in 1994. He was drafted into the Army in 1951 and served two years during the Korean Conflict. He had been employed by The Milwaukee Road (Soo Line, CP Rail) for 40 years, retiring in December 1989.

Lawrence enjoyed bowling, volunteering for VFW and The American Legion, breakfast with friends at The Country Skillet.

Memorials may be directed in Lawrence’s memory to House of the Dove Hospice Home – Marshfield, WI.

Lawrence was preceded in death by his parents: Albert and KatherineHodan; sister, LouVerna Hodan: brothers: John Wilda and Leo Wilda.