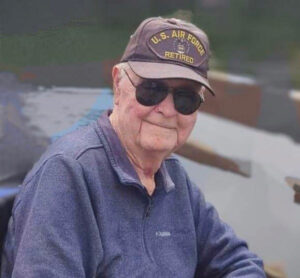 Lee was born October 10, 1929 in Wisconsin Rapids, Wisconsin to Hubert and Susan (Stillwell) Cotton. He grew up in Wautoma, Berlin and Appleton. Lee graduated from Appleton West in 1947 where he enjoyed competing in tennis. He joined the Air Force in 1950 during his career in the Air Force. Lee did tours of duty in Korea, Japan and Vietnam. During his career he managed maintenance on aircraft, including the F 86 jet. He later switched his career to weather. Lee retired from the Air Force as Master Sergeant in 1971. After his retirement from the Air Force, Lee returned to the Wautoma area where he married Joyce (Piskule) Cotton in 1977. He worked in the Wautoma area for Marks Brothers and Silverlake Sanitary District, amongst many others.

Lee enjoyed long walks, fly fishing, and traveling to Hawaii with family. He suffered a stroke in 2020 and resided at the veterans home at King Wisconsin until his death.

Lee was proceeded in death by his loving wife, Joyce Cotton . His parents, his brother, Richard Cotton, his sisters, Mary Gear, Ruth Trudell, and Carol Ruskin.

As per Lee’s wishes, there will be no services at this time, but a celebration of life will take place at a later date. He will be interred at the Cottonville cemetery in rural Adams County.

Memorials in Lees honor can be sent to the Humane Society of your choice.