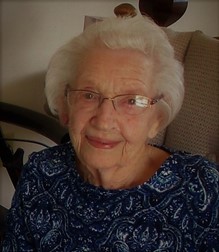 She was born in Quincy on November 1, 1925 to Roger and Mary (Klein) Mikoda. Lucille married Melvin Pollock in 1948. Before his untimely death in 1951, they had two children, Mark and Marcia. In 1954, she married Clarence Mathe and together they had three children, Connie, Carol and Curt. When Clarence’s son Howard came to live with the family, it rounded out the household of ‘yours, mine and ours.’

She always had a way of making people feel at home – owning and operating the Friendship Café with her sister, Grace and then hosting thousands of guests at the Hiawatha Motel at Castle Rock Lake with Clarence. She will be remembered lovingly by all of the friends of her children that considered her their second “mom”.

Lucille was preceded in death by her parents, her husband Melvin, husband Clarence, son Mark and daughter Connie. She is survived by her children Marcia (Robert) Wysocky, Carol (Philip) Nemiec, Curt (Dawn) Mathe, Howard (Donna) Mathe and many grandchildren and great-grandchildren. She is also survived by her loving sister, Grace (Trzesniak) Solchenberger.

Per Lucille’s request, no service will be held with a private family burial at a later time.

The family would like to thank everyone at Agrace Hospice for their wonderful guidance and care, and request that any donations be made to the Agrace Foundation, 5395 E. Cheryl Parkway, Madison WI 53711 or the charity of their choice.