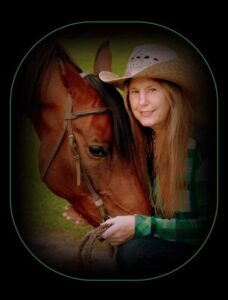 Mary was born April 9, 1959, in La Crosse, to Francis and Theresa (Hafner) Wilkes. She graduated from UW River Falls with a bachelor’s in elementary education and was hired by the A-F school district as the middle school art teacher in 1984 until she retired.

Mary married Michael Harris on August 5, 1989, in Adams, WI.  In 1991 Mary and a group of horse enthusiasts put 30 miles of horse trails in on WRPCO lands and the castle rock horse trails were born followed by Mary’s very own horse camp known as Ukarydee. She was actively involved in annual trail maintenance always and loved to ride the trails all over the state.

Mary enjoyed flower gardens, riding horseback, traveling, her art studio with her clay and jewelry, her fishpond and patio area she built times three, and occasionally getting to fish on the river. She was very active and touched everyone she came in contact with. Mary had a love for her Lord and Savior Jesus, and she allowed Him to change her every day, which is the secret to all the joy that she displayed for everyone.