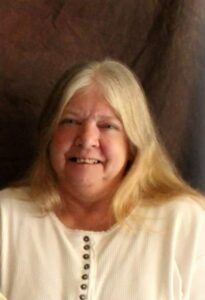 Graveside services and luncheon will be held at Moundville Methodist Cemetery at W5501 County Rd. O, Endeavor Wisconsin. This will be announced at a later date.

Nancy was born March 21, 1955 in Stoughton Wisconsin to Clifford and Elaine Anderson.

She later married the love of her life David K Julseth on June 30, 1972 in Stoughton, they were married for 44 years until his death in 2017.

Nancy worked at various places but was well known for bartending at the VFW in Adams-Friendship, but loved being a stay at home mom raising her boys. She also enjoyed playing bingo, the slot machines and hanging out with family and friends.

Nancy is further survived by many loving nieces, nephews, cousins, her great-grandchildren Bentley and Braelynn, former daughter-in-law Ashley and adopted grandson Patrick S, along with many others who called her grandma.

She is preceded in death by her parents, Clifford and Elaine, her brother Denny and sister-in-law Judy Anderson, her many animals, and the love of her life Dave.

A very special thank you to everyone who made Nancy‘s life special!