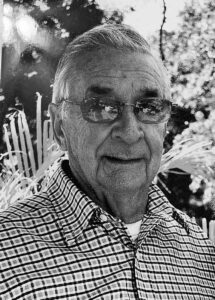 Norman Howard Allen of Adams passed away peacefully, surrounded by his loving family, on Monday, October 12, 2020. Norman “Norm” who was a lifelong resident of Adams County was well known in the community and will be missed by many.

Norman was born on December 15, 1933 in Richfield Wisconsin to Mark (Coon) and Myrtle Lyons Allen. Norm graduated from the Adams-Friendship High School in 1951. He married Esther B. Johnson on September 07, 1954, at the Little Brown Church in Nashua, Iowa. Together they had six children. Randy (Linda) Allen, Vicki (Andy) Kolff, Dan (Channin) Allen, Cindy (Tim) Mickelson, Lori Allen-Mitchell, and John (Yvonne) Allen. Norman and Esther built and made a home for their family in Adams.

From an early age, Norman worked alongside his father, uncles, and brothers, mastering carpentry, plumbing, and electrical skills. He used these skills in many trades throughout his life. As a teen, he worked as a film projectionist at the Adams Theater. He also spent time working on a mink farm and working at the Nekoosa Paper Mill. Norm signed on with the Chicago and Northwestern Railroad in the 1950’s with his brother Lyle. While working for the railroad Norm also ran the Standard Station in Friendship. Years later Norm and Esther purchased the Standard Station in Adams. Norm ran Allen’s Amoco with the help of his eldest son Randy. After retirement, he drove a potato truck for Wagner Farms. And was also a Transport driver for the Adams County Sheriffs Department.

Norm was a lifelong volunteer contributing to several organizations to include the Masonic Lodge, Shriners, Adams Volunteer Fire Department, and the Lions. Norm served as Potentate of the Shriners in 1999. He worked tirelessly for the Shrine Hospitals transporting children for care. He also enjoyed his time as a member of the “Heart of Wisconsin” club.

His skills were numerous and were shared and passed on to his kids, a few of which were Carpentry, Electrical, and Mechanics which became the life-long job skills of several kids, particularly Randy and Dan. All his children and grandkids benefited from learning the meaning of honest hard work, telling the truth, and taking pride in all that you do.

His favorite past times that he enjoyed and shared with family and friends for many years, was golfing and bowling, and attending car shows. Iola Car Show was his favorite which he attended for over 20 years with one of his sons John Allen since 1992.

He is preceded in death by His wife Esther (B Johnson) Allen; parents, Mark (Coon) and Myrtle (Lyons) Allen; brothers, Lyle Allen; Irvin Allen and David Allen and a sister, Dorothy (Allen) Sindelar.