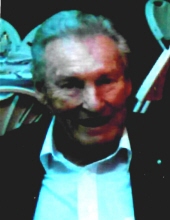 Richard (Dick) Robb passed peacefully into Eternal Life and joined his heavenly father March 5, 2021 with his loving family by his side. Dick was born September 8, 1935 Milwaukee, WI. to Helen Semrow Robb and Lester Robb. He graduated from Adams-Friendship High School in 1954. February 2, 1955 he enlisted in the United States Army and was stationed at Ft. Leonard Wood, Mo., and Ft. Eustis, Va. While at Ft. Eustis he was honored as Soldier of the Week, and Soldier of the Month. On April 28, 1955, he married his High School sweetheart, Charlene Burian at St. Joseph’s Catholic Church in Adams, Wi. This April would have been their 66th Wedding Anniversary. He was an avid “Packers” fan even before the Lombardi years. He played football, in high school and in the Army at Ft. Eustis, Va. In later years he was honored to be inducted into the Adams-Friendship Athletic Hall of Fame. His faith and family came first. At St. Bernadette’s, Milwaukee he coached Little League Flag Football and softball. After working 14 years for Wisconsin Electric Power Dick changed careers and went into the insurance business. After 2 years as an agent he was asked to move to Illinois to take a District Manager position with Farmers Insurance Group of Companies. During this time he earned an Associates Degree thru South West Missouri State by attending evening classes at DePaul University. At Saint Francis De Sales Parish, Lake Zurich he served as Chairman of the Parish Religious Education Board and as a Boy Scout Leader, Troop 309. He and Char participated as Service Project Leaders for Confirmation classes for 4 years. As a member of the fraternal organization, Lake County Life Underwriters, he ran successful Art Auctions to benefit A Safe House for abused women. After 30 years, in 1999 Dick retired from Farmers and enjoyed boating with Charlene on Lake Michigan. After retirement they moved to Wauconda and joined St Mary of the Annunciation Parish where he enjoyed taking Communion to homebound and to patients at Advocate Condell Hospital. He was honored to have received his pin for 500 hours, before walking became a problem. Reading, Scrabble, and Cards were favorite pastimes. He particularly loved playing games with his grandchildren. During the pandemic we figured out to play with relatives away online. Survivors are his wife, Charlene, one daughter Patricia (Bill Alberth) 3 sons, Jon (Cindy), Michael (Marie), Thomas (Stacy). Also surviving 2 brothers Ralph Robb (Mary) and Hank Hermann (Donna). 14 grandchildren, and 6 great-grandchildren with number 7 due in July. Plus many nieces and nephews. He is also survived by 2sisters-in-law, Jeanne Moran, and Gladys York. His son James, and great-grandson Arlo preceded him in death along with his parents, brother David Hermann and sister and brothers-in-law, Marge & Stuart Bell, Tom Moran, and Aaron York. A funeral mass will be held on May 24, at 11:00 am at St. Mary of the Annunciation Catholic Church, 22333 West Erhart Rd., Mundelein, Il. 6060. The link for sign-up to attend the funeral Mass due to Covid is https://www.signupgenius.com/go/904054CACAD2DA5FD0-funeral3 Memorials if desired may be given to St. Mary of the Annunciation Parish, Mundelein, IL. or The Adams-Friendship Hall of Fame Scholarship Fund, Attn Bob Garnett, 1919 -13th Court, Friendship, WI. 53934.