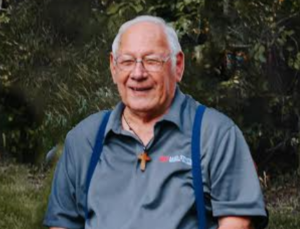 Robert Allen Beaver born February 2, 1941 passed away peacefully in his sleep March 28, 2021.  Bob was the eldest son of Herbert Cecil and Arlys Jean (Cummins) Beaver.  He grew up in Knoxville, IA and attended school until mid-elementary school.  The family then moved to Janesville, IA where he graduated from high school.

Bob attended Simpson College in Indianola, IA where he played football, basketball and baseball.  It was at Simpson that Bob met the love of his life Margo Ann Keil. Bob and Margo were married in May of 1962.  Bob joined the Air Force and was deployed overseas to Turkey, where he and Margo lived for several years.  While in the Air Force Bob was in radio communications but specialized in morse code.  Bob was on the base Football team and competed in Judo.

Bob was a devoted and caring family man.  He loved being outdoors, fishing, hunting, riding on Castle Rock Lake in his pontoon boat.  An avid sports fan he loved to watch sports being played especially when he could watch his grandchildren play.   Bob coached football, basketball, baseball and track early in his career.

Next to sports Bob’s greatest passion was asking the question, “What can I do that is good for children?” and then giving back to causes that he believed in.  His many years of membership in Optimist Club of Monroe and Adams Friendship Lions were a testament to that.  There were many years that he worked long shifts at the cheese curd stand for the Monroe Optimist Club and many more that he dedicated to the A-F Lions at the Adams County Fair stand.  Bob served in volunteer roles with the Wisconsin Technical College system as a board member for individual colleges and on the state technical College board.  His most recent passions were the A-F Education Foundation and the Moundview Memorial Hospital Healthcare Foundation.  His efforts in the name of those organizations resulted in building of the Fine Arts Center in 2015 and in the growth of the hospital foundation from 1993 to its present stature. Which includes renovating existing facilities and purchasing equipment that otherwise would not be possible.  He was also instrumental in the building of the new Adams- Friendship High School.

Interment will be at the Mt. Repose Cemetery, Friendship, Wisconsin at a later date.