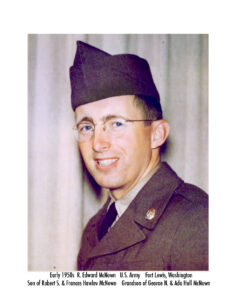 Ed was the son of Robert S. and Frances Hawley McNown of Mauston, WI.  He lived most of his life on the McNown Century Farm near Mauston, where he helped his father and uncle work their land.  He attended Mile Bluff School and graduated from Mauston High School in 1949, where he was a member of the boxing team. He served in the U.S. Army at Fort Lewis, Washington and studied Accounting at Western Wisconsin Technical College in La Crosse, WI.

Ed enjoyed traveling in his van to the southwestern states. He had the opportunity to fly to Washington, D.C on a Badger Honor Flight, which was a highlight of his life. He also enjoyed repairing vehicles and watching the Green Bay Packers.  He volunteered his time at the Juneau County Historical Society and the Lindina Evergreen Cemetery. These volunteer activities attracted him, due to the fact that his great-grandparents, John and Jane Bagnell McNown, were early Juneau County settlers and are recognized as a Wisconsin Pioneer Family.

Ed was preceded in death by his parents, sisters Barbara McNown Seitz and Lorelei McNown, and brothers-in-law Gerald Seitz and Wilfred Hosig.  He is survived by his sisters, Marjorie (Steven) Zwickel and Catherine Hosig, and many nieces and nephews.

The family would like to thank Liberty Village assisted living facility in Adams, WI

and Heartland Hospice Services in Stevens Point, WI for the care they provided Ed.

Private family services, with military honors, will be held at a later date.

Interment will be at the Mauston cemetery.

It is suggested that those wishing to give memorial donations in Ed’s name make them to the Juneau County Historical Society or the Lindina Evergreen Cemetery Association, both located in Mauston, WI.