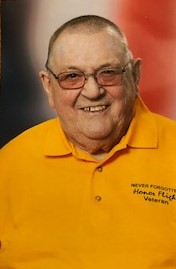 Memorial services with military honors will be 2:00 p.m. on Saturday, May 15, 2021, at the Bancroft Baptist Church in Bancroft. Visitation will be from 1:00 p.m. until the time of service.

Robert served in the United States Navy from 1963 until he was honorably discharged in 1967.  During that time, he did two tours of duty in Vietnam and received several medals.

Following his time in the service, Robert was a conductor/brakeman for the Chicago and North Western Railroad for over 20 years.  When he was not away working for the railroad, he enjoyed farming, being with his family, helping others, deer hunting, and reading westerns. He especially loved taking the Badger Honor Flight with his fellow veterans.

Robert was a member of the VFW in Plainfield, American Legion in Bancroft, and the Bancroft Baptist Church.