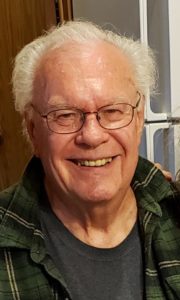 Fondly known as Bob or UB by his friends, he was born July 20, 1938 in Minneapolis, MN to Walter and Elsie West (Jacobsen).

Bob served in the United States Army from 1957 to 1959.  He spent time in France, Spain and Portugal, then returning to Chicago where he met his former wife Barbara West; they were married in 1964 and had four children.

He had a very successful career for many years working in the heavy equipment business with companies such as Pettibone and Italtractor.

He is survived by his siblings Ardyce Stacy of Vernon, FL, Milton West of Holcomb, WI, Janet Stacey of Gainesville, FL, Diane Perkins of Gurnee, IL, Brenda Mickels of Holcombe, WI and his children Michelle Culliton of Arlington Heights, IL, Julie Covelli of Cary, IL, Jamie West (Tami) of Lake in the Hills, IL and John West (Erica) of Saukville, WI and 11 grandchildren.

He was preceded in death by his father, Walter West, his mother, Elsie West and his sister Patricia West of Ladysmith, WI.

A Celebration of Life will be held from 11:00 a.m. to 2:00 p.m. on Saturday, August 31st, 2019 at the Dellwood Pavillion.  How lucky are we to have had something that makes saying goodbye so hard.  He will be forever in our hearts.