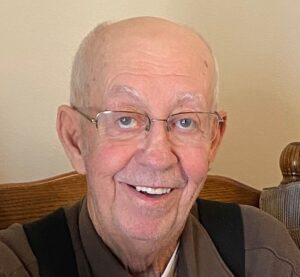 Rodger was born in the Township of Preston on May 28, 1937 (Friendship, Wis.) to Harvey and Enid (Nee Thurber) Baggs. Rodger worked as a machine operator at Mach-White steel rope factory in Kenosha, Wis. for 5 years then moved back to the family farm. He worked for Nekoosa Paper Mill Woodlands Dept. for a few years and then took on the duties of the farm doing dairy, beef, and pork along with custom fieldwork. He worked for Nicholas Ent. (Coloma, Wis.)where he helped put together the first 4-row potato digger in Wisconsin (1975). He was employed for many years with Church Farms (Grand Marsh) also over 20+ years with Miller Farms (Hancock). He worked as a Logger with Lenard Burrows Trucking besides cutting and splitting firewood up until his retirement last year.

His passion and drive for hunting deer was beyond anyone we’ve ever known his hunting skills and marksmanship was second to none it still amazes me to this day the things I saw him accomplish he had a way of figuring out what the deer would do next just ask someone that spent time in the field with him. He enjoyed hunting with dogs especially coon hunting. He also hunted in the western states taking numerous elk and other games. He was always up to go hunting with family and friends and no matter what the game and was first to help with their harvest. I truly believe he enjoyed taking individuals hunting putting them under his wing that didn’t get the opportunity to hunt much or have a way to get there. He actually lived for the hunt. Summertime was fishing time he enjoyed going to northern Wisconsin and the UP chasing big bluegills and smallmouth bass that passion was with him to the end telling everyone that he was going to get healthier so he could come home and go fishing again.

He took great pride in helping others in later years and was very genuinely a big giver of meat and vegetables to family, friends, or who was in need of something going out of his way to find things for them potato’s, peas, carrots, sweetcorn, onions, and firewood. He loved being around people speaking of the day’s past and sharing stories along with the laughter. I had one person say for a little guy he sure left a big footprint. He was an incredible person, a great individual, and a great father you will surely be missed dad.

Roseberry’s Funeral Home is assisting the family. There will not be a funeral