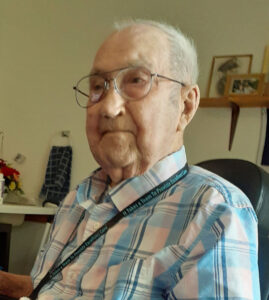 Private services will be held at a later date.

Roger was born July 21, 1917 in Monroe Center, Wisconsin to William and Elizabeth Robert’s. Roger was married to his beloved wife Edna (Paulson) on November 10 of 1945 approximately 7 days after being discharged from the U.S. Army. Roger served from Jan. 13, 1942 until Honorably Discharged as a Staff Sgt. on Oct. 30, 1945, he served in France, Belgium, and Germany. He was very proud to serve his country and had many stories and pictures whenever the subject came up. Roger was a lifetime member of the VFW.

After his discharge from the Army, Roger worked in the family business, Robert’s Brothers Sales, initially running the auto body and repair and a wrecking yard. He was very much a people person and moved into the sales of camping trailers, mobile homes, and finally furniture and appliances. Roger was known for his mechanical ability to fix/repair almost anything, he made many friendships over his career working with people.

Roger always enjoyed his large garden and giving away the produce he raised. Roger and Edna enjoyed spending winters in Florida during their retirement years with many friends and relatives stopping to visit them. He will be missed by all his relatives and friends. The family would like to give special thanks to Rev. Jane Quam, Heartland Hospice Care, a special thanks to Laura and Ashley, and Liberty Village staff. Roger had a knack to form friendships with all who met him. You were a great Dad, Grandpa, Great Grandpa, and GreatGreat Grandpa. RIP Dad