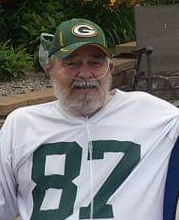 Graveside services with military honors will be Saturday, July 11, 2020, at 1:.00 p.m. at the Monroe Center Cemetery.

Ron was born September 17, 1947, in Racine, Wisconsin to Sylvan & Vivian (Johnson) Jossart. He graduated from High School in Racine and served in the United States Navy.  He was honorably discharged in 1967.

He left Styberg Engineering in Racine as a punch press supervisor before retiring to Adams County in 2002.

Ron enjoyed building and flying model airplanes, his passions were fishing & hunting. He enjoyed snowmobiling and grooming trails later on.  Ron built furniture, birdhouses, and lamps for a hobby but most of all Ron loved spending time with his family and friends.

Ron was preceded in death by his parents Sylvan & Vivian.