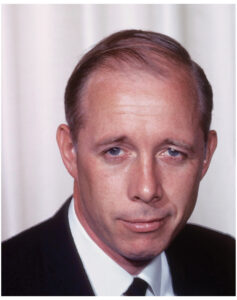 On Sunday, December 5, 2021, Ronald E. Lewis, passed away at age 92.  Ron was born to Verne and Irene (Parks) Lewis on April 21, 1929 in Friendship, Wisconsin.  Although adversity and opportunity compelled him to relocate, his deepest roots remained in Friendship.  Ron was valedictorian of his high school class in Racine, and he served in the U.S.A.F. during the Korean War.  He received degrees in mechanical engineering from Illinois Institute of Technology (1955) and the University of Southern California (1958).  His degrees were earned in work/study programs with J. I. Case and Lockheed Aircraft Corporation.  At Case, he designed harvesting equipment, notably the hillside combine and the forage harvester.  At Lockheed, he joined the newly formed Missiles Division and began testing missile equipment under flight conditions.  He became a systems engineer for the Fleet Ballistic Missile program from its inception through completion of the Poseidon missile.  Ron became program manager for Satellite Launch Systems Engineering and Integration.  Following the Space Shuttle Challenger accident, his focus shifted to developing an alternative launch capability using the Titan Intercontinental Ballistic Missile.  His work responded to the imperative to place national security payloads in geostationary orbit without Space Shuttle capability. This required frequent travel to Cape Canaveral and to meetings with military agencies and contractors.  These culminating years of his career were very interesting and exciting for Ron.  He retired in 1993.

While in college, during a sailboat outing on Lake Michigan, Ron met his wife, Blanche Lillian (Ivanec).  They devotedly raised five children together, providing a secure and enriching environment in Sunnyvale, California.  Beyond supporting his children’s interests and goals, Ron developed recreational interests in fishing, camping, bicycling and skiing.  Packed in their Rambler station wagon, the family enjoyed long, rustic camping trips.  In his 50’s, he could still be found riding 100-mile (“century”) and 200-mile (“double-century”) bicycle rides—many of them with his children.  He took a bike ride with family for his 80th birthday.  From his 50’s through his 70’s, he became an avid downhill skier.  In a life shaped by early hardship, some of his biggest, boyish smiles were on snowy mountains.

Ron is preceded in death by his wife, his sister (Dorothy Gain), brother (Donald), and daughter, Susan Elisabeth (Benjaram).  Susan (a registered nurse) was caring for him at the point of her untimely death, and will be remembered with him in the same service.  Ron is survived by four children: Verne (& Zalei), Ronald Jr. (& Kristine), William (& Sandhya), Ellen (& Ron Prouty).  He has 12 grandchildren, 2 step-grandchildren, and 18 great granchildren.

A memorial will be held in Friendship on Saturday, June 18th, 2022 at Roseberry Funeral Home.  He will be laid to rest at Mt. Repose Cemetery.