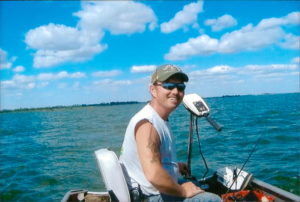 Ronnie (Ron) Charles Cole, 57 of Friendship was born into eternal life on January 12th, 2020 surrounded by family and his beloved dog Gunner after a hard-fought and courageous battle with cancer.

Funeral services will be held at 2 pm on Saturday, January 18th, 2020 at Roseberry’s Funeral Home in Friendship. Visitation will take place from noon until the time of service.

Ron was born on September 9th, 1962 in Wisconsin Rapids to Charles and Beverly Cole.

He attended Roche A Cri grade school and Adams-Friendship schools, where he made many lifelong friends, and enjoyed wrestling, playing basketball and football.

He was employed by Gumz Farms up until his illness.

Ron was an avid fisherman and outdoorsman. He enjoyed spending time with friends and family, especially his grandchildren. He also enjoyed gardening and attending concerts, as well as stock car racing. Ron was always willing to lend a hand to anyone in need and took great pride in working hard and getting the most out of each day.