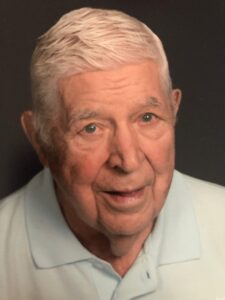 Russell Claude “Bud” Hale, 89, of Mauston passed away surrounded by his loved ones on Sunday, Oct. 18, 2020 at Mile Bluff Medical Center in Mauston WI. Russell was born in Mauston on January 24, 1931, to Russell and Louise (Kattner) Hale of Mauston, WI. He graduated from Mauston High School and eventually joined the Navy during the Korean War.

Bud worked at the Bank of Mauston, Volk Field, Spencer State Bank and later retired from the Juneau County Highway Commission in 1992.
Bud joined Karen Dallman in marriage on September 21, 1963. They had 3 girls together Drea, Brenda and Paula. This marriage later ended in divorce. Russell joined Gloria Guichard in holy matrimony on October 10, 1987 and have been happily married for 33 years.
Bud enjoyed spending his time gardening, cutting wood, fishing in the UP, hunting, driving the midget cars, going to Oktoberfest races, other races in the area, going to the girls and grandkids sporting events and especially harassing the referees at the grandkids basketball games. He always kept himself busy putzing around anywhere he was. It was also no secret that Bud loved all of his dogs that he had through the years.

Bud will be greatly missed by those that survive him, his wife, Gloria, three daughters, Drea Leverenz of West Allis, Brenda (Stacy) Downing of Ontario, and Paula (David) Bloor of Ontario; one stepdaughter, Nicole (Chris) Guichard of Madison; one stepson, Ron Guichard of New Orleans; one grandson Zak Leverenz of Menomonie; two granddaughters, Haley and Rylee Hall of Ontario; and one step-grandson, Bronz Geissler of Madison, 2 special girls Michelle and Rachel and many special friends.

He was preceded in death by his father Russell, mother Louise, and his half-brother Jack (John) Downing.

A visitation will be held on Monday, October 26, 2020 from 12:00 pm to 2:00 pm at the Mauston United Methodist Church. A service will be held afterwards for immediate family only.

Memorials may be given in Russell’s name to the Shriner’s Children’s Hospital or the Mauston United Methodist Church.