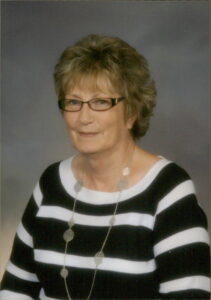 Sandra Catherine (Sutherland) Rogers, age 74, of Hancock, Wisconsin went to be with the Lord Tuesday, July 14, 2020, after a battle with cancer.

Sandra was born on September 22, 1945, in Whitewater, Wisconsin. The daughter of Floyd and Margaret (Blumer) Sutherland.  She went to Milton Union High School, Milton, WI. She married Richard A. Rogers on August 11, 1962, in Milton, Wisconsin.  This marriage was blessed with three children, Rick, Kristine & Brenda.

They lived in Janesville, WI until May 1977 when the family moved to Hancock, WI.  While in Janesville she worked numerous jobs but one of her favorites was Bankers Life and Casualty where she worked for 10 years before moving north.

She worked selling real estate for a couple of years at Lake Arrowhead and then 10 years for Century 21. In 1991 she went to work at the fertilizer plant at Allied Co-op in Adams, WI.  She truly enjoyed her 21 years there at which time she retired.

Sandra was the town clerk for the Town of Colburn for 22 ½ years.  She was also a Sunday School teacher for numerous years.

She enjoyed doing crafts and spending time with her family and friends.